Mating Pill Bugs
May 22, 2010
I read online that this is rarely observed – don’t know if that’s true or not but I’m sending it to you in case you didn’t have it documented on your website. Keep up the good work.
Tim
Memphis, TN

Hi Tim,
Thanks so much for contributing your wonderful images to our website.  We really appreciate the generosity of the Wildlife Theater website.  It seems strange that this would be such an uncommonly observed activity since there is no shortage of Pill Bugs in our own garden. 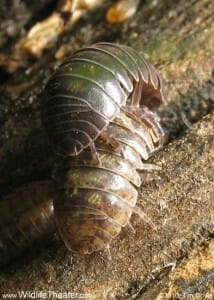 Update:  March 10, 2019
We just received a comment from Prigot which states:  “I’m sorry to inform you pillbug doesn’t mate in this way.. mostly for this specie able to roll in ball. Here they are having antennae contacts. The reproductive behavior is easily recognizable since male are placed on one side of the females and then on the other side. The reason is simple: females have two genital openings on the ventral side and males have two penises. So mating occurs in two stages on either side of the female. If the male is above as shown in the picture, it cannot reach the openings of the females.”  So, we are mistaken about this being mating activity.