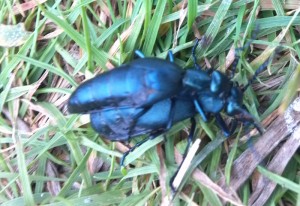 Subject: Blue Beetle
Location: Castine Maine
October 11, 2014 10:10 am
Multiple Blue Beetle apparently copulating in path October 5, 2014 in Castine ME. I write a nature column in a local newspaper and wish to include this. I tried three photos before and it would not go. I’ll try one this time.
Signature: Peter

Dear Peter,
These are mating Blister Beetles in the genus Meloe, and they are commonly called Oil Beetles.  We have numerous examples of mating Oil Beetles on our website.