Please identify this creature!
Location: Central Mississippi
September 17, 2011 8:44 pm
Dear Bugman,
I live in central Mississippi on a woodline. I have had problems with this creature in the humid summer season. This is the second year they have returned. Each time I see them they have 1-2 partners hanging around on their backs. They are very disgusting and when I kill them it’s as if they have blood and organs. I have killed 5 tonight. Please help! I am very curious! Thanks for your help!
Signature: Shannon 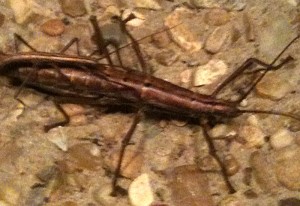 Dear Shannon,
This is a photo of a pair of Two Striped Walkingsticks in the genus Anisomorpha, commonly called Muskmares.  Adults are frequently found in pairs as both your letter and photo indicate.  You have mentioned that they appear to have blood and organs when you kill them, and your observations are correct.  Though it is quite different from human blood, insects do have a substance known as hemolymph, and they most certainly have organs.  It seems you have been killing these Walkingsticks because you find them disgusting and not for any other reason discernible from your email.  You should exercise caution when approaching Muskmares.  They are capable of spraying a noxious substance for a considerable distance with amazing accuracy, and when they are threatened, they aim for the eyes of their attacker.  The Richmond Eye Associates online newsletter contains an article entitled Ocular Injury from the Venom of the Southern Walkingstick that is an excerpt From EA Paysse MD, et al. Ocular Injury from the Venom of the Southern Walkingstick. Ophthalmology 2001;108:190-191.  We are going to reproduce the information from the Richmond Eye Associates in its entirety here:
“The Southern Walkingstick (Anisomorpha buprestoides) is an inconspicuous insect known for slow movement and camouflage. They are found in the southern United States, Florida and Texas for example, and feed on Oak leaves, Rhododendron leaves, and brambles. While otherwise harmless, this insect has a defense mechanism of spraying a toxic substance at potential predators, such as flying birds. It is known to have excellent marksmanship, often hitting the eyes of the predator. This report is of a significant ocular injury sustained by a child sprayed in the eye by a Southern Walkingstick.
An 8 year old boy was playing in his backyard when he discovered a Southern Walkingstick approximately one foot from his face in a bush. The insect sprayed a red fluid into his face that caused immediate pain and blurred vision in the right eye. The eye was flushed with water at home and in the emergency room.
The following day, he was examined by an ophthalmologist for continued blurred vision and foreign body sensation. A corneal abrasion involving about 30% of the cornea, and a large adjacent conjunctival abrasion were seen. The abrasion slowly healed over a 6 day period with no permanent effects or loss of vision.
The venom of the Southern Walkingstick is known to be locally toxic to mucous membranes, and is painfully irritating if inhaled. Fortunately, the toxin seems to cause only superficial damage, and no reports of permanent scarring has been observed in humans. There is one case involving a dog who subsequently developed a corneal ulcer after injury. Thus, exposure to the toxin should be followed by copious irrigation at the site of injury, with follow-up in the emergency room for further treatment.”