Subject: Long-Horned Brown Beetle in DR
Location: San Jose de las Matas, Dominican Republic
October 19, 2012 10:23 am
Hi, I live in the Dominican Republic and I have this picture of two largish beetles with very long antenna, black and orange striped. The beetles themselves are dark brown with a yellow band across their abdomen. Their legs are lighter brown with black joints. I have an idea they were mating as the larger one was on top of the smaller one. There was a few of them around this tree, apparently attracted to sap (actually there was almost a party going on in this tree with other bugs like butterflies and stink bugs-I think). Also, under these two you can see a quantity of white foam. This was in January and the tree I believe is a Delonix regia(Flamboyán in Spanish, Flamboyant?).
I have not been able to find anything like on the Internet, except it seems to be some kind of long-horned beetle.
Thanks for your help. Just in case, I have more pics, but I think these are best.
Signature: MDS

Dear MDS,
We were not having any luck identifying your Longicorns in the family Cerambycidae, and the web search that eventually led us to an identification was “longicorn Hispanola.”  We identified your amorous pair as Trachyderes succinctus on cerambycoidea.com.  We confirmed the identification on BioLib.  We believe the butterfly is the Dusky Emperor, Asterocampa i. idyja, based on photos posted to Butterflies of America.  Seems the Longicorns, the Dusky Emperor and the Scarab Beetles in your third photo were all attracted to the sweet, oozing sap. 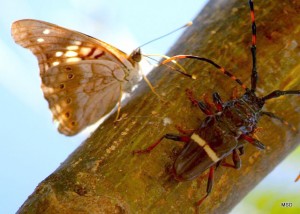 Thank you! I was so pleased to get your answer.  I was definitely on the wrong track.  And also for identifying the other ones.
I am getting to know your site! So informative and fun at the same time. I love taking nature pics, including bugs, and now I’m going through and trying to identify them. (But I’m going to have to ban it from my work computer if I want to get anything done.)