Salvadoran moths
Dear bugman,
I just got home from a week-long trip to a rural mountain clinic in eastern El Salvador. I lived there for almost a year & never saw this insect before. It sure looks like 2 mating moths (please see attached pictures). We are all wondering what it is. They were about 5 inches long. Thanks for your help,
Ali Hunt 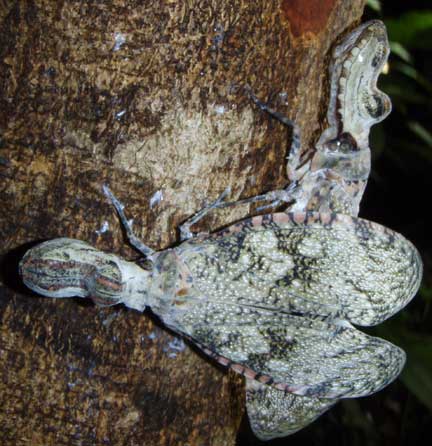 Hi Ali,
Your letter and photo could not have come at a more fortuitous time. These are mating Lanternflies, Fulgora laternaria. They are Fulgorid Planthoppers and not Moths. There is a famous illustration by the 17th Century Artist Maria Sibylla Merian of this species that she drew in Surinam in 1700 and it is included in the show of her work currently on display at the Getty. What’s That Bug? has been asked to deliver a point of view lecture on the show and we will be using your photo and letter as a visual aid during our lecture. According to Wikipedia: “In several countries, such as Ecuador ,Colombia and Venezuela , there exists the myth that if somebody is bitten by the machaca , he or she must have sex within 24 hours to prevent an otherwise incurable death. The insect is actually harmless to people.”

Because of its appearance, the Lanternfly is also called a Peanut Head Bug or Alligator Bug, according to the Clemson Museum page devoted to it. The Lanternfly has eyespots on its lower wings, partially visible in another of your photos, that will startle any potential predators, a form of protective mimicry. The Lanternfly is also believe to mimic a lizard and this second photo shows this quite well. This insect is called a Lanternfly because it was once thought to be bioluminescent, but that doesn’t seem to be the case.

Update: (07/05/2008)
Dear Daniel,
Wow, thanks! I am glad you will be able to use the photos. If you are interested in the more exact location, it was taken in Los Abelines, El Salvador. The closest marked town on google maps is El Cirigual, El Salvador. If you do a google map search you will find it! Have a wonderful time at the lecture.
Ali Hunt