Subject: 50 of the came out of nowhere
Location: Delaware Ohio 43015
April 19, 2017 6:40 pm
We have lived here for 17 years and have never witnessed this before. One late afternoon mid April in Central Ohio our detached garage started to buzz. There were at least 50 of these mating. What are they and are they dangerous. We have small children and pets. Very concerned. Thank you,
Signature: Thank you Ryan Boyer 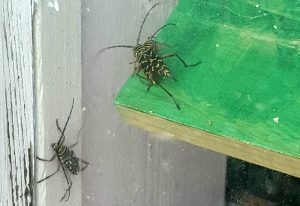 Dear Ryan,
Was there a pile of firewood in or near your garage?  Because of their spring appearance, we know these are Hickory Borers and not the very similar looking and closely related Locust Borers that usually appear in the fall when the goldenrod is blooming.  Neither species is dangerous, but both mimic stinging YellowJackets for protection.  While not dangerous, Hickory Borers have strong mandibles that might deliver a painful nip if carelessly handled.  Larvae of Hickory Borers are wood borers, and according to BugGuide:  “larvae mine newly dead hickory, and sometimes other hardwoods.”