Giant Ichneumon wasp and mates
December 29, 2010 1:32 pm
I wish I would have discovered your web site earlier in the year.  I had the unusual pleasure of discovering the Giant Ichneumon along with her small males in my garage.  It was an awesome experience to see her and two of the smaller blue black males.  They were flying around the garage and attracted to the fluorescent light. At the time I did not know what they were.  My husbands first reaction was to grab the bug spray….needless to say I did not allow that to happen!  Why is it that so many people want to destroy what they do not understand? Anyway, I love your site!
Signature: Kristi Bird 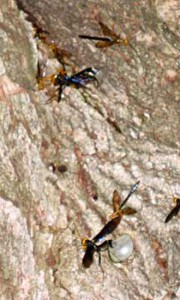 Dear Kristi,
Thanks for sending in an awesome letter.  WE wish you had enclosed a photograph.  We found a photo in our archives that illustrates male Giant Ichneumons congregating around females to accompany your letter in our posting.  It was originally submitted in 2007.