Subject: Mating Geolycosa
Location: Sacramento Mountains, New Mexico
September 5, 2012 7:57 pm
About a month ago, I’d sent in a number of photos of some of the local arthropods I’d encountered during my regular evening strolls around my location. Among them was a photo of a particularly large female Geolycosa specimen, which was featured in your response. I’ve been seeing quite a few more of these spiders around lately, even outside of their burrows (I’m including a photograph of an impressive male I’d found outside my office); 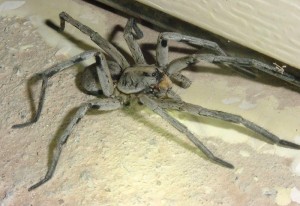 additionally, this morning I was out checking on some plants when I decided to check on that very same aforementioned spider. At first, I thought what I was seeing was her full body outside the hole; while this is indeed part of what I was seeing, it took me a moment to notice the similarly-sized male on top of her. At first I was afraid she’d been attacked, but then I recalled something I’d seen before. I’d never witnessed this before myself, but I believe they were in the middle of mating! Ind eed, later the female was by herself in her usual position, more than healthy. I get the feeling we’re going to be seeing an awful lot of little ones.
Signature: Grady 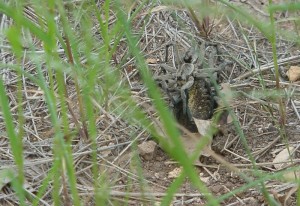 Dear Grady,
Thank you for following up on your previous posting.  The mating Burrowing Wolf Spiders must have been fascinating to observe. 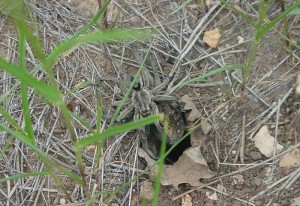