Sphinx Moth?
Location: Connecticut shoreline
July 7, 2011 9:52 am
These two very large moths were mating in my garden in Clinton, CT. The larger of the two is almost 3” long (head to wing tip).
I thought they might be blinded sphinxes, but they don’t have the eye on the underwing.
Beautiful and interesting, but what???
Signature: Sincerely, Toni Leland 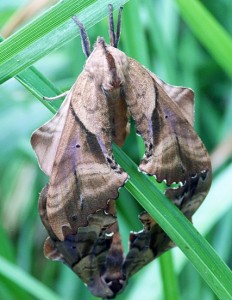 Hi Toni,
You are correct.  They are mating Blinded Sphinxes, but the eyespot is covered until the underwings are revealed.  This is the third submission of Blinded Sphinxes we are posting today, and they seem to be eclosing from far and wide, including Washington State and Prince Edward Island, Canada.