Subject: fuzzy bug
Location: Southeastern Wisconsin
November 8, 2012 8:23 pm
Hello!
I love your website.
Could you identify this little fellow for me?
He is about 1/4 of an inch long, and appears to be made up of lint and dust, just his feet and antenna appear ’clean’. I don’t think that he is dirty, it’s just that his coat appears to be looking perhaps moldy?
The photo doesn’t show this very well.
I know I have seen him in a bug book before, but I can’t find him.
He was found at work on the counter after a load of vegetables were delivered to the retirement home where I work. I don’t know if that has anything to do with his arrival. He would have been squished by others, so I brought him home. I would like to feed him and release him if I can find out what he would like to eat and where to put him. Seems friendly. His antenna mimic my finger movements.
I am here in Southeastern Wisconsin in early November.
Thank you very much!
Signature: J. Evans 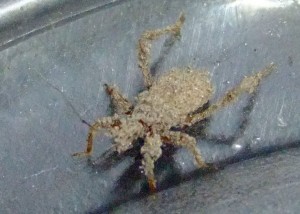 Dear J. Evans,
You are being awarded the Bug Humanitarian Award and we hope we can convince you not to keep this Masked Hunter as a pet, but to give it free rein in the home where it will no doubt hunt Bed Bugs, Cockroaches, Silverfish and other common household pests.  Each time the Masked Hunter molts, it also sheds its layer of lint, but it will soon begin to pick up fresh debris in its immediate surroundings, making it a very good camouflage artist.  One of our favorite Masked Hunter images is wearing the blue fibers of a carpet.