Subject: Blue Butterfly Drowning Incident
Location: Silver Lake (Los Angeles) CA
July 10, 2014 12:26 am
Hi Daniel,
These tiny butterflies never stand still long enough to get a good photo, except when they turn up in the dog’s water bowl. In the sunlight, their wings flash brilliant blue near their bodies (I thought their bodies were even blue – after reviewing the photos – I was wrong on that count.)
Wingtip to wingtip, the butterfly might measure an entire inch across. In the sun they look more gray than brown and their blue is iridescent. They particularly like the Plumbago (blue flowers) growing all over the hill.
http://redcarproperty.blogspot.com/2014/07/corralitas-drive-blue-butterfly-drowns.html
Signature: Diane E 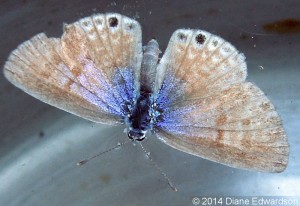 Hi Diane,
The Marine Blue, Leptotes marina, is a very common butterfly in Los Angeles, and their adaptation to cultivated plumbago as a larval food plant has undoubtedly led to the presence of the Marine Blue throughout Los Angeles.  This female has more brown on its wings than the bluer male.  The North American Butterfly Association (NABA) website has a nice comparison of the sexes.  It appears that the coloration of the Marine Blue is not because of pigment, but because of the way the scales react to light, so we will attempt additional research on this speculation.