Lovebug
Location: Mid-Missouri
October 26, 2010 12:50 pm
A friend of mine suggested that I submit some of my photos to your site (love the site by the way). I found these a few days ago all over the Amur Honeysuckle berries that line my woods. I believe it to be a Lovebug and they are sure interesting looking creatures. These were the first that I have seen this year
Signature: Nathanael Siders

Hi Nathaneal,
This is definitely a March Fly in the family Bibionidae which includes the Love Bugs in the genus Plecia, but we haven’t the necessary skills to identify the genus or species.  That would require an expert and most likely a physical specimen.  We can say that she is a female because the eyes of the male are much larger.   Presumably, if he could speak, he would inform his mate that they are:  “All the better to see you with, my dear.”  You may see some additional examples of March Flies on BugGuide. 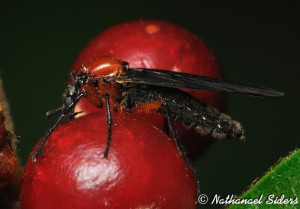 Probably a March Fly from Australia