Moth name
Location: NW CT.
October 2, 2011 1:48 pm
We live in the woods of NW Connecticut and we often see this moth. It looks like a leaf when in a plant.
Signature: Welles 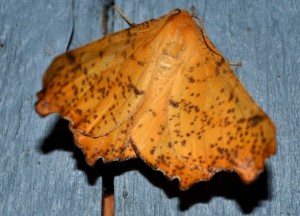 Dear Welles,
We were relatively certain that this was a Geometrid Moth, and it took us a bit of searching before we found a match with the Maple Spanworm, Ennomos magnaria, which is represented on BugGuide.  Other common names for the species include The Notched Wing, Notched-wing Geometer
and Notch-wing Moth.  It seems that both the adult and the caterpillar are excellent camouflage artists, and BugGuide indicates:  “Larva: a superb twig mimic – body green, brown, or gray, dappled with minute white spotting; pronounced leafscar-like swellings; head flattened and directed forward with long antennae; legs of third thoracic segment greatly swollen at their base, commonly held out from body; dorsum of second and fifth abdominal segments, and venter of third with raised transverse ridges; eighth abdominal segment with low, darkly pigmented dorsal warts.”