What Is this
Hi Mr. Bugman,
Could you help me identify this critter? It is as large as the biggest woodcutter bee, but never seems to behave like a bee. We see it annually in the spring in San Jose California. It only appears in the afternoons once the temperature hits 70 degrees F, or more (never less). It takes up a station in a spindly bush where it charts out an erratic course and constantly flies in, and through, the bush. I have never seen one land, it just flies constantly, making picture taking a challenge. I have never seen it engage in any feeding behavior, sipping nectar from flowers, munching on leaves or even chasing or catching other insects. Seems to have no stinger or proboscis. The wings are clear. There are several that have appeared this year, but each stakes out a plant and flies sentry duty around it, chasing other examples away. They seem partial to blueberry bushes and plants in that family, though this one was seen near a dwarf apple tree. They never appear when the plant is fruiting, however. I took this picture about a month ago, and this seems about the end of the season for spotting them. I can not detect any coloration on the clear wings, but they do appear to be veined. Can you help with the identification? Thanks,
Bill Knickel 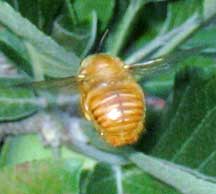 Hi Bill,
This is a male Valley Carpenter Bee, Xylocopa varipuncta. The female is a robust black bee and the much shorter lived male is this lovely golden color.