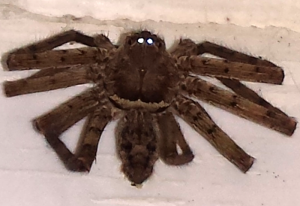 Dear Corey,
This is a male Huntsman Spider, Heteropoda venatoria, a species that is now found in warm climate port cities around the world, most likely because it was spread with banana shipments, giving it another common name of Banana Spider.  Huntsman Spiders do not build webs in which to snare prey, but they hunt nocturnally for cockroaches and other nocturnal prey, meaning they are frequently tolerated in homes in the tropics because of the advantage of having a patrolling Huntsman Spider eliminating unwanted guests with six or more legs.   Your individual appears to be dead.

Giant Crab Spider with Spiderlings: one from our archives now a Facebook sensation