Green Spider
Location: Montecito Heights
August 31, 2011 8:04 pm
What is this? I’ve never seen one before and it’s in my house!
It’s about an inch and a half. The narrow depth of field in my camera requires that I show you the crazy antenna things and apparent eyes in two different pictures.
Signature: Martha Benedict 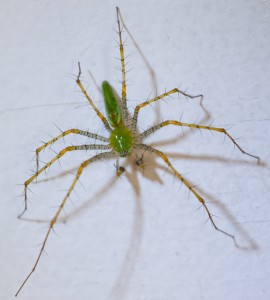 Greetings from the other side of the 110 freeway Martha,
Our offices are in Mt Washington, Los Angeles, CA, and though you did not provide a state, we are guessing you might be our neighbor.  This stunning spider is a male Green Lynx spider, Peucetia viridans.  Green Lynxes do not snare their prey with a web.  They hunt and pounce on insects and other arthropods.  They seem to have a fondness for awaiting on blossoms for pollinating insects and they often gravitate to rose bushes.  A female will eventually mature and once she has mated, lay one or more egg sacs that she fiercely guards.  Green Lynx Spiders are perfectly harmless to humans.  We have taken the liberty of combining the sharp focus components of your individual images so that both the eyes and pedipalps are sharp.  Male spiders have more developed pedipalps than females and they are used during mating.  According to Encyclopedia Britannica online:  “Spiders have six pairs of appendages. The first pair, called the chelicerae, constitute the jaws. Each chelicera ends in a fang containing the opening of a poison gland. The chelicerae move forward and down in the tarantula-like spiders but sideways and together in the rest. The venom ducts pass through the chelicerae, which sometimes also contain the venom glands. The second pair of appendages, the pedipalps, are modified in the males of all adult spiders to carry sperm (see below the section Reproduction and life cycle). In females and immature males, the leglike pedipalps are used to handle food and also function as sense organs. The pedipalpal segment (coxa) attached to the cephalothorax usually is modified to form a structure (endite) that is used in feeding.”  The additional explanation continues:  ” In male spiders the second pair of appendages (pedipalps) are each modified to form a complex structure for both holding sperm and serving as the copulatory organs. When the time for mating approaches, the male constructs a special web called the sperm web. The silk for it comes from two sources, the spinnerets at the end of the abdomen and the spigots of the epigastric silk glands located between the book lungs. A drop of fluid containing sperm is deposited onto the sperm web through an opening (gonopore) located on the underside of the abdomen. The male draws the sperm into his pedipalps in a process known as sperm induction. This may take anywhere from a few minutes to several hours. Sperm induction may occur before a male seeks a mate or after the mate has been located. If more than one mating occurs, the male must refill the pedipalps between copulations. ” 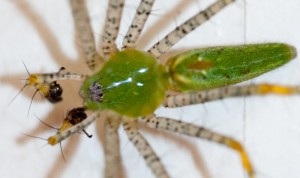 Thank you so much, Daniel! This is way beyond my wildest hopes. Absolutely fascinating!
And yes, we are neighbors across the Arroyo. I forget that you have an international following and I should have been a little more complete.
I will not hesitate to send you photos of all my mystery insects. I have some powerful macro lenses and love to get a good photo. In this case, I didn’t even set up my tripod. Next time! Thanks for compositing the detail shots.
What a thrill!
Martha

If we can use our PhotoShop skills to improve the anatomical renderings of our favorite local species of spider, then we will have to overlook the blatant disregard for journalistic journalistic integrity it connotes.  Our biggest defense is that when it was conceived, this website was an art project.  It has really metamorphosed from that remote time in another millennium.