Subject: Male Dobsonfly
Location: Machu Picchu cloud forest
December 18, 2012 12:12 pm
This male dobsonfly was stung (hunted) by a wasp in the first, unfortunately blurry, photo. In the second photo it is, rather jerkily, crawling away from the encounter. I actually didn’t notice the wasp until I was processing the photo later that evening. The photo was taken in the waterfall and orchid garden behind the Machu Picchu Sanctuary Lodge on December 4th.
Signature: Peter 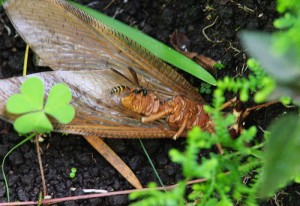 Dear Peter,
We are very intrigued by this documentation.  The wasp might be one of the Paper Wasps, but if that is not correct, we are relatively certain it is some species of social wasp.  We suspect the wasp is attacking the Dobsonfly in order to feed larval wasps in the nest.  The legs that are obviously missing from the Dobsonfly might have been bitten off by the wasp so that parts of a meal could be carried off to the nest as it would be a physical impossibility for the wasp to carry off the entire Dobsonfly.  We suspect that this wasp or other members of the nest eventually killed and dismantled the Dobsonfly piece by piece in an effort to feed the brood.  This is a marvelous documentation of the Food Chain. 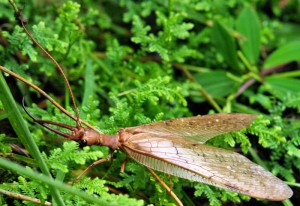