Subject: 3-4 inch spider!
Location: Santee
December 28, 2015 7:38 pm
Hello, we fished this spider out of our pool yesterday in Santee, California. I think it’s a trap door spider but it is 3 to 4 inches long and from what I’ve read they are usually much smaller. Do you think it’s possible? If not what type of spider do you think it is?
Signature: Jill 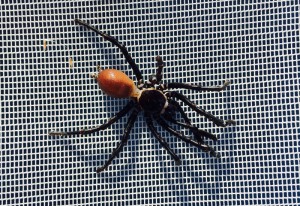 Dear Jill,
This is indeed a male California Trapdoor Spider.  BugGuide does not list a size for the species, but it does provide this fascinating bit of information:  “According to Guinness World Records, as of 2009, this is the strongest spider. It has been able to resist a force 38 times its own weight when defending its trapdoor. This equates to a man trying to hold a door closed while it is being pulled on the other side by a small jet plane.(1) Unfortunately, the Guinness book doesn’t mention if it’s the strongest North American spider or if it’s the strongest in the world. Also, one thing to think about is whether or not every spider’s strength has been measured (no, they most definitely have not). The information is flawed in many respects, but it still asserts the fact that these spiders are pretty strong.”  In our own experience, while four inches seems a bit large, a three inch measurement is within reason for a large male, but it is also possible that drowning caused this individual to swell larger than its life size.  Generally, the first sightings of the year for male California Trapdoor Spiders coincide with the first seasonal rains as the males begin searching for mates at that time.  Though we were away from the office when you wrote, we understand there was some southern California rain around that time.  Today though is the official arrival of El Niño rains in Los Angeles.

Thank you! Very interesting information. I appreciate you taking the time to get back to me.