Stag Beetle grubs and…lice?
Location: Wheaton, IL
December 4, 2011 11:02 pm
Hey Bugman,
The other day my dad was complaining that there was something crawling on his hand. We took a look at it and It reminded me of some type of louse, but as we looked through the bug books and skimmed the internet, nothing turned up. Wondering if you could help? We live about thirty miles west of Chicago, IL. Also found these three big grubs under a rotting log about a month ago… Probably reddish-brown stag beetle larvae?
Signature: thanks, Sam 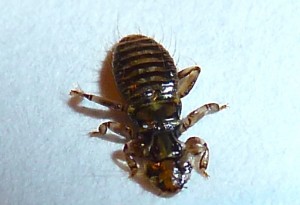 Hi Sam,
We are dealing with your two requests separately in an effort to maintain some semblance of order in our archives.  We believe you father encountered a Louse Fly in the family Hippoboscidae.  Louse Flies are true winged flies, however, their flight is quite feeble.  When the alight upon a host, often a large mammal like a deer or a sheep, they shed their wings and remain attached like a louse, sucking blood.  Some Louse Flies are found on birds.  You may compare your image to this BugGuide image.

Correction:  December 5, 2019
A comment from Ricardo indicates this is most likely a Bird Louse rather than a Louse Fly.