Subject: Butterfly – Ashland, OR
Location: Siskiyou Mtns. – Ashland
July 28, 2014 9:49 pm
My friend has claimed this as a Lorquin’s admiral. Is it?
Signature: TerryDarc 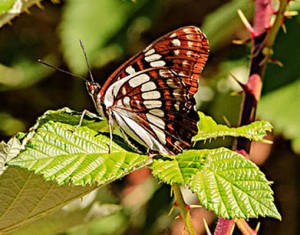 Which Admiral is it???

Thanks, Daniel!
It didn’t look quite right for a Lorquin’s. Hybrid is a good possibility. Sorry but that’s the only pic we’ve got.
-Terry