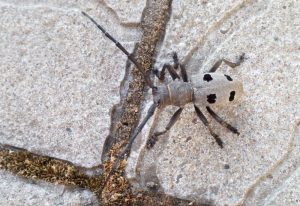 We did not recognize this Longicorn in the family Cerambycidae, so we did a web search for European members of the family and we found this FlickRiver posting from Croatia that is identified as Dorcatypus tristis.  Continued research indicates that name is a synonym as The Longhorn Beetles of the West Palaearctic Region site names it Herophila tristis and states:  ” Adults in:  March – July.  Host plant:  Polyphagous in deciduous trees and herbaceous plants.  Distribution:  Albania, Austria, Bulgaria, Corsica, Croatia, France, Greece, Hungary, Italy, Romania, Sardinia, Serbia, Sicily, Slovenia, Turkey.”  It is also pictured on Le Monde des Insectes and Encyclopedia of Life.