bug that looks like a wasp
July 23, 2009
Hello Bugman,
This bug looks similar to some longhorn beetles I found on your site, but not exactly. I found it on a plant near my yard. Any info would be much appreciated. Thanks
Pam in Virginia
Cape Charles, VA 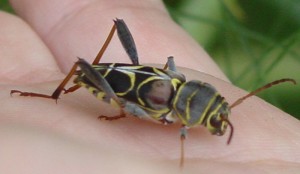 Hi Pam,
The reason your beetle doesn’t look exactly like anything on our site is that this is the first example we have ever posted of Neoclytus scutellaris, a Longhorned Borer Beetle with no common name.  It is in the same genus as the Red Headed Ash Borer which is very well represented on our site.  According to BugGuide it is found in “Eastern North America, apparently widespread. Reported from Oklahoma, North Carolina, Florida, and no doubt many other states.” and “Larvae feed in sapwood of (dead?) oaks, hickories, also grape.”