Lobstermoth caterpillar pictures!
My house has a guest! Well, this one is living outside. When I found him (or her) clinging to my son’s shoelace, I put him in a box and took him to the Butterfly House. The lady at admitting, after peeling herself nervously off the wall, pointed me to the next building over where they concentrate on such lovely natural wildlife. Of course, I already knew I was holding a Lobstermoth Caterpillar. What I didn’t know was what this fellow ate, and what it’s known as here in Northern Japan. They’re called Shachihokoga. Ga meaning moth, and Shachihoko being those fish-shaped gargoyles adorning the roofs of some houses. … The pictures were snapped by a nice fellow at the nature center who has a camera that can macro. Someday I’ll have one. Or learn to use one… or both. He told me they eat chestnut, acorn and other such leaves. Really?
Jill Sylvan

Hi Jill,
The crazy looking Lobster Moth Caterpillar, can be found throughout Europe, and in parts of temperate Asia including Korea and China as well as Japan. The range information was located on what we believe to be a Scandinavian website. 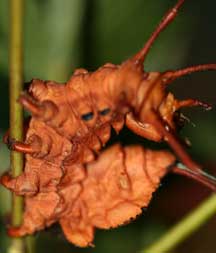