Safly?
Location: NW WA state
August 14, 2011 6:15 pm
I am in NW WA, found 3 of these crawling around and ovipositing on a dead grand fir. They have a short tail, but not as long as the ones in the horntail pictures. Their antenna are very long and curl when they aren’t exploring like this one is. They have a fuzzy head, but the body is smooth. Very interesting insect. Thanks for doing this site, quite cool.
Signature: Nature lover in WA 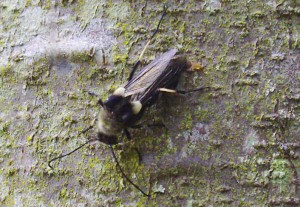 Dear Nature Lover,
Morphologically, the Lion Beetle, Ulochaetes leoninus, is very atypical, and it doesn’t really resemble any other members in its family Cerambycidae, the Longhorned Borers.  This is only the fourth submission of this rare alpine species we have ever received.

Excellent! Thank you. My husband and I have been in the woods and up in the mts quite a bit and this was something quite new and interesting.  We are at 400 ft elevation in thick regrowth of grand fir with some cedar, dogfir, etc mixed in. These guys were on a dead grand fir.  Thank you for your great site and for responding so fast. My sisters will be quite interested also.
The subject should have been “sawfly” but for some reason I missed the “w”, though “safly?” makes sense too.
Looking through your website for the other 3 submissions, found one from another person in my area.  Ours did this raising of the front legs also.  The dead tree they are laying on has sawdust around it, thinking is full of termites so we were planning on dropping and burning it. However, we will leave the bottom part they were on for their eggs and larva to have and put the lowest rounds off in the woods, just in case there are some in there.
I find it odd that 2 of your listing come from high country, 2 from the Port Townsend area low country. Keep up the good work and thanks again.
2009/08/03/flower-longhorn-deformed-cosmosalia-chrysocoma-we-believe/
Jean