Subject: What is this caterpillar and the hairy stuff around it?
Location: Sydney
May 4, 2017 10:59 pm
Hi! I live in Sydney, Australia and it’s currently autumn. I saw this caterpillar on my cumquat (calamondin) tree. Do you know what kind it is? What is that hairy structure around it? Is it the start of a cocoon?
Signature: Carey 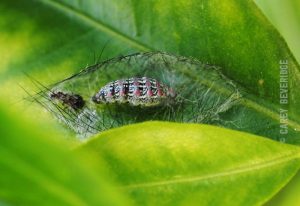 Dear Carey,
We found an exact match to your cocoon on FlickR, but alas, it is only identified as a “wingless moth cocoon.”  We actually found that image after finding several similar looking, but not exact images, beginning with Butterfly House where there are images of the caterpillar, caterpillar in its cocoon and pupa in the cocoon of Cyana meyricki, and this information is provided:  “The cocoon made by the caterpillar is quite remarkable. It is an open square mesh cage, constructed out of larval hairs held together with silk. The hairs are too short to construct the cage directly, so the caterpillar attaches pairs of hairs to each other end to end, and uses these pairs to make the sides of the cage. The pupa is suspended in the middle of the cage, equidistant from the sides. The caterpillar even manages to push its final larval skin outside the mesh cage while forming its pupa. When the moth emerges, it appears to exit the cage without damaging it.”  We found another image of the caterpillar in its cocoon on FLickR.  Australia Museum provides the common name Lichen Moth and provides this information:  ” This lichen moth makes an elaborate open mesh cocoon using the shed hairs from the hairy caterpillar which are held together with silk. The pupa is suspended in the middle.”  Now we will present our opinion.  We believe this is a Lichen Moth Caterpillar in its cocoon, after losing its hairs and constructing the cocoon, but before the final molt to the pupa occurs, so you are seeing a pre-pupal caterpillar that doesn’t really exactly resemble either the caterpillar or pupal stage as it is in transition.

Update:  May 17, 2017
We just approved a comment that the Clouded Footman, Anestia ombrophanes, is another possibility, and images on Butterfly House tend to support that possibility.  The site states:  “They form a pupa inside a sparse cocoon made of silk and larval hairs, attached to a fence, a tree, or a wall.”