Subject: Unusual Bug
Location: Rochester, NY
June 19, 2014 11:38 am
I saw this yesterday at the Rochester Institute of Technology in Rochester, NY.
By looking online I can see that it is very similar to a Giant leopard moth, but with some significant differences.
The one I saw has black spots instead of black circles, and notice how the body protrudes behind the wings.
It is also less than 2″ long.
Any ideas?
Signature: Thanks, Doug 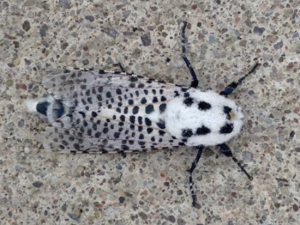 Dear Doug,
Though the Giant Leopard Moth, which is one of the Tiger Moths, and your Leopard Moth, Zeuzera pyrina, look similar, they are not even closely related.  Your Leopard Moth is in the Carpenter Moth family Cossidae, and according to BugGuide:  “Unlike the Giant Leopard Moth, this one is not native to the US. Supposedly introduced (from its native Europe?) in mid-1800s; first reported in North America at Hoboken, New Jersey in 1882.  It is considered a pest of some fruit trees.”  You can compare your image to this image on BugGuide.