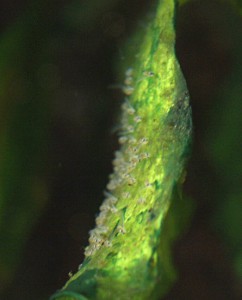 Wednesday, 1 July 2009, 9:33AM
Upon returning from Mendocino Sunday night, I quickly noticed that Lefty and Digitalis had spawned in my absence and the eggs had hatched. The spawning was no surprise. Digitalis was filling with eggs and both fish had breeding tubes extended when I left on Friday morning. Wrigglers were attached to the Amazon Sword leaf near the window on the left side of the aquarium. The next day, the fry were moved across the aquarium and then back again. Tuesday morning, I shot some photos through the water surface and Tuesday evening, the fry were still on the leaf, though on both sides of the surface. This morning, at first light, the fry were still there, but now, three hours later, with camera in hand, I cannot find them. The parents have moved them again. I expect they will be free swimming in a day or two.

Update: Friday, 3 July 2009, 7:58 PM
Today the fry became free swimming and the parents are quite defensive.  Yesterday was a busy day for the parents.  The fry were moved several times, and eventually were returned to the first leaf I photographed them on.  The eyes on the hatchling wrigglers are much more pronounced now. 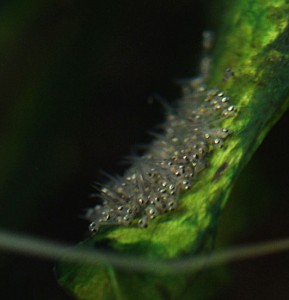 Both parents are very protective, splashing me whenever I get close with the camera or with food. 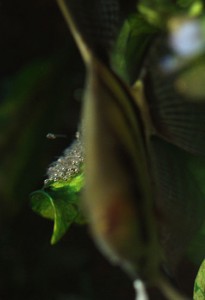