You guessed it… I can’t identify a bug…
Hello bug man!
I’m from Johannesburg, South Africa and I have hundreds of these bugs in a single bush in my garden (but nowhere else) They don’t seem to be damaging the plant but they’re sure freaky looking. Most of them have eye-markings on their backs, but some of them look different. Any idea what they are and whether they’re dangerous? Thanks!
Andrew 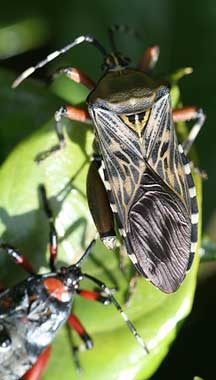 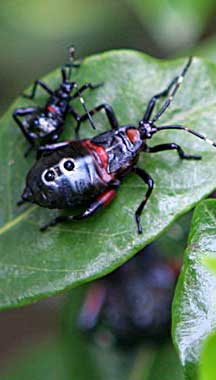 Hi Andrew,
You have adult and wingless immature nymphs of some species of Leaf Footed Bug in the family Coreidae. They suck plant juices and give off an odor when disturbed.

Update: (02/12/2008)
While researching the Millipede Assassin Bug image that we just received, we believe we have stumbled onto the correct identification of this Coreid, probably the Giant Twig Wilter, Carlisis wahlbergi.