Subject: Attacking or helping my tomatoes?
Location: Birmingham, AL
August 4, 2012 2:09 pm
As a new gardener, I rarely know if a bug is a friend or foe–but since my tomatoes have all kinds of problems, I’m assuming these are in the ”foe” category. I’ve looked up every tomato pest website and can’t find these guys listed/shown anywhere. Hope you can ID.
Signature: Bhamster 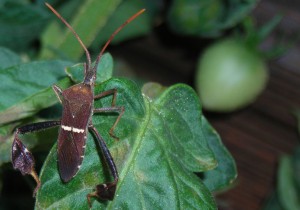 Dear Bhamster,
We believe we have correctly identified your Leaf Footed Bug as Leptoglossus zonatus, based on photos posted to BugGuide and the range map listed on bugGuide.  There is also this information on BugGuide:  “Feeds on flowers and fruits of many plants, including citrus, tomatoes, various members of the squash family, and many other plants” and “Considered a pest not only for the feeding damage on various crops but also as a transmitter of plant pathogens.”  We would recommend hand picking them.  We see this same species of Leaf Footed Bug in Los Angeles feeding on the fruit of pomegranate, and the site where they use their piercing and sucking mouthparts is inedible because of the enzymes the insect injects while feeding.

Thank you so much for the reply! I was surprised that you would reply, much less do it so quickly. (I tried to reply and thank you on Saturday, but my computer was acting up.)
Celine McCoy

A Reader Comments
August 19, 2012 10:26 pm
Question about the post (link pasted below) about the leaf-footed bug: Do they sting the everloving bejeezus out of you when you try to pick them up to get a closer look at them? I got stung by something in central Virginia that I’m sure was close to this (not necess. exactly the same), so I would recommend against hand-picking, if you mean it literally. Or I would recommend gloves! It didn’t swell up like a sting from a wasp, but it was quite painful for 20 mins like a deerfly bite. So that’s why I don’t have a picture. 🙂
2012/08/04/leaf-footed-bug-26/
Signature: Rachel

Hi Rachel,
While we would not rule out that a Leaf Footed Bug might bite, we suspect you were more likely bitten by an Assassin Bug.

Thanks for your reply! I looked around and am pretty confident it was one of these guys (I couldn’t tell the exact one). I could see the distinctive diamond shape and the leaf-shaped legs before I started screaming. 🙂
http://pubs.ext.vt.edu/3012/3012-1522/3012-1522.html