Subject: Green and White ladybug thing
Location: Louisiana
February 8, 2017 3:39 pm
I found this ladybug thing in my backyard in southern Louisiana in late Jan. The reason I say ladybug is its shape and wing structure. When it initially landed next to me it’s wings didn’t immediately tuck under its abdomen(?) after landing. I’ve searched the internet and can’t find a thing!
Signature: Buggy Fresh 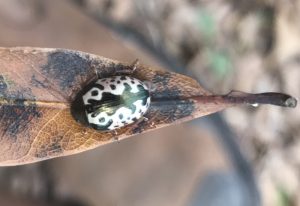 Dear Buggy Fresh,
You have encountered a Leaf Beetle in the genus Calligrapha.  According to BugGuide:  “38 spp. and sspp. in 4 subgenera in our area” and many species look quite similar, so we are reluctant to attempt a species identification.