Flying Bug in Whitstable UK
Location: Whitstable UK
July 2, 2011 6:33 am
Dear Bugman
My sister pictured this in their backyard in Whistable, Kent, UK and we would like to know what it is please.
Thanks
Signature: Michelle Morris 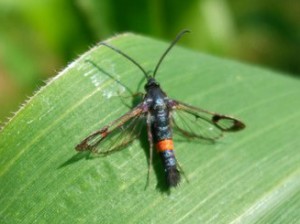 Hi Michelle,
This is one of the Clearwing Moths in the family Sesiidae, a group which contains species that mimic wasps for protection.  We believe we have correctly identified this as a Large Red Belted Clearwing, Synanthedon culiciformis, thanks to the UK Moths website.  The larvae of many of the Clearwing Moths are borers in woody plants, and the UK Moths site indicates:  “The species inhabits heathland and woodland, where the host tree, birch (Betula abounds, and is known from much of mainland Britain.”  The UK Moths site also states:  “Although generally larger than the similar Red-belted Clearwing, the sizes overlap and it is more easily distinguished by the orange-red suffusion at the base of the forewings.  The moth flies earlier in the year than many other clearwings, being on the wing in May and June.”  The Red Belted Clearwing is also represented on the UK Moths website.