Subject: Caterpillars on the march
Location: Northern Arizona
August 17, 2014 5:36 pm
This afternoon we discovered thousands (no, I’m not kidding -THOUSANDS-) of these caterpillars
traveling south across our property. Of course we went straight to the garden to see if that’s where they were coming from, but they were coming right through the fence from the State Land Trust to the north of us! Some of them were nibbling on leaves near the chicken pen, but none of them bothered any of the plants in the garden. We scooped up a bunch of them for this photo and then tossed them to the chickens. The chickens were not impressed.
We’re in Prescott, AZ at about 5,000 ft elevation in oak-chapparal country.
Signature: gnatknees 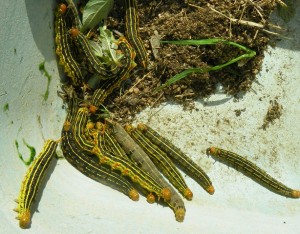 Dear gnatknees,
These are caterpillars of the Whitelined Sphinx, Hyles lineata, and they go through periodic cycles that include occasional population explosions in the desert regions of the American southwest.  The last major population explosion we received visual documentation of was in 2007.  Earlier this year, we received a request from a PhD candidate from the University of Arizona to report any masses of caterpillars, and if you are so inclined, you can email [email protected] and make a report.

16 Responses to Large numbers of Whitelined Sphinx Caterpillars in Arizona!!!