Wonders from Malaysian Borneo!
Location: Malaysian Borneo
August 12, 2011 9:09 pm
Hey Bug-people!
A challenge for you!
I took myself backpacking through Southeast Asia a while ago, and came back with some amazing pictures of bugs.
I’ve included three of what were to me the most fascinating and baffling varieties. Can you help me identify them?
Cheers!
Signature: Doug 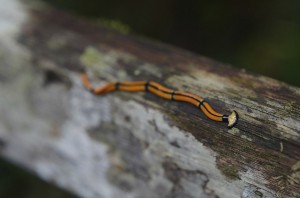 Hi Doug,
We really only like posting identification requests with a single species, or at most, members of the same family so that they would be archived together.  The orange and black wormlike creature is actually a Land Planarian or Flatworm.  We will try to research the species because that coloration is quite distinctive.  We quickly found a match on Flickriver that was identified as a species in the genus Bipalium. The website also contains this fascinating information:  “Terrestrial flatworms, land planarians or hammerhead worms whatever you call them they are simple yet interesting creatures. During the day they are hidden away from the sun and heat. But at night, at night when the temperature lowers, and the humidity spikes, these predators voraciously feed on annelids. Their diet comprises mainly of earthworms, following their slimy trails until they fall upon and devour them. However they also eat insect larvae, slugs and are not above a little cannibalism. They feed by entwining themselves around their prey and entrapping it in a sticky mucous. It then proceeds to evert its pharynx onto the prey and secrete digestive enzymes, taking up the partially digested food particles into the gastrovascular cavity. Where they can then be digested and properly absorbed in the intestinal epithelia.
Land planarians move on a film of mucous secreted onto a ventral strip of closely spaced, powerful cilia (creeping sole). They usually follow plants for ease of movement and are able to lower themselves down to the earth on a string of mucous.
The flatworm body can reproduce asexually, reproducing an entirely new organism by breaking off from the parent organism. Only the posterior end has this capability as the front end houses nerve ganglia and organs vital to survival. However this would lead to a genetically homogenous population making it prone to disease and unstable. Therefore flatworms also reproduce sexually. Like the earthworms on which they feed, they are hermaphroditic, having both male and female sexual organs. In fact the entire body is very metabolically flexible since during lean times they are able to digest reproductive organs and most other cells to keep themselves alive.
Flatworms come in a variety of beautiful colours to display their aposematism. In addition to their mucosal secretions, they may have toxins to deter predators. In this way, their most fearsome predators are other flatworms.”

Wow!  I guess everything’s bigger on Borneo, because that larval Firefly was  nearly three inches long!
Thanks for that. The info about the flatworm was particularly fascinating.
Doug

What appeared to be Sesame Seeds are likely Tapeworm Segments
Location: Malaysia

One Response to Land Planarian from Malaysia