Subject: ID please
Location: near water fall
September 16, 2014 6:58 pm
Please ID this bug. First it looks moth to me. But i am confused.
Signature: hello 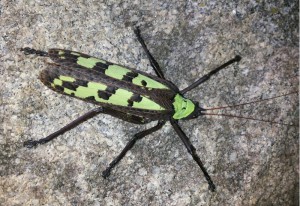 UHHH, and where was this water fall?????

Karl Identifies mystery Katydid:  September 25, 2014
Hi Daniel and hello:
It looks like Parasanaa donovani (Tettigoniidae: Pseudophyllinae). It is apparently the only species in the genus Parasanaa. There’s not much information to be found but according to Wikipedia it feeds on some kind of cactus and “When the thorax is pinched, the insect squirts a slimy yellow fluid from two slits on the dorsal surface of the mesothorax, with a range of three to four inches. One aperture may discharge at first, and the other after the insect is pinched again. Some fluid also oozes out from other apertures over the body and legs, and also from the stumps of broken-off legs.” The species was first described from India and most of the surprisingly few online references also suggest it is an Indian katydid, but the Orthoptera Species File gives a distribution that stretches from India to the Solomon Islands. The waterfall remains a mystery. Regards. Karl

Thanks so much Karl.  You have more patience than we do.  We weren’t going to take any time to research the identity of this Katydid without a true location.