Subject: Black & Yellow Beetle in SE New Mexico
Location: Southeaster New Mexico
October 4, 2015 4:52 pm
I found this on my walk this morning (October 3, 2015) on a nature trail on the outskirts of town in southeastern New Mexico. It was in the 90’s last week but has been cool and rainy the last few days. He / She did not look familiar. Every time I tried to get a close up, it would circle to the far side of the branch. It is black and yellow on its shield-shaped back with black and yellow bands on its underside. I searched your site and BugFinder for black and yellow beetles, but I didn’t find any that seemed to match. I love your site and the story behind it. Thanks for putting in all the time and effort.
Signature: Curious 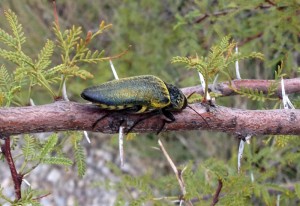 Dear Curious,
We located this image on BugGuide that matches your Metallic Borer Beetle or Jewel Beetle from the family Buprestidae.  The posting states that the collector:  “gave the specimen to New Mexico State University as they only had three of this species.”  Your individual was found on an Acacia, and according to BugGuide:  “Larval host unknown, adults on Acacia, Prosopis.”  This really is a beautiful Jewel Beetle and your observations indicate that the species has excellent eyesight. 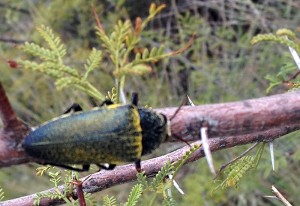 I found your response on the website. Thank you, again, for your work. It was a kick to learn that I was probably right when I thought the beetle was unusual, if NMSU only had three in its collection. I found and photographed another bug on that same walk, but I am still looking online to see if I can identify it, If I can’t, I may forward it to you for your assistance.

We apologize if we did not write back to you directly as that is our usual method of responding upon posting a submission.

No apology necessary!  I knew to look on the website and found my submission there faster than I thought I would.  I am surprisingly proud that I found an unusual specimen (and I’m even happier I did not find the human louse as did someone else whose picture was posted on the same day as mine).  I just wanted to say thank you and didn’t know how to post directly to the website.  My technical knowledge is too antique to figure that out, so I responded directly to your email.  My apologies if I confused you.
I still haven’t had any luck finding the other bug I photographed on the same walk, so I will probably submit that, too.

One Response to Jewel Beetle on Acacia from New Mexico