Subject: What is this bug?
Location: Hamilton, NY
September 30, 2012 2:21 pm
My co-worker and I found this bug this morning at work. We have never seem anything like it and really want to know what it is.
Signature: Thanks, redneckduckling 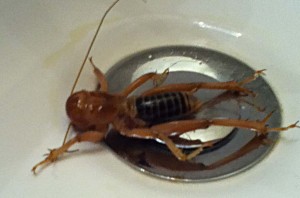 Dear redneckduckling,
Unless we are incredibly mistaken, this sure looks to us like a Jerusalem Cricket or Potato Bug in the family Stenopelmatidae, which according to BugGuide has a range limited to the western states.  We cannot help but to wonder what your place of work might be, and if it is possible that this insect which looks so much like a Jerusalem Cricket somehow managed to get shipped to your job location.  We are going to write to Eric Eaton to get a second opinion on our identification.  We will also tag this posting as a mystery, because this would appear to be a significant sighting.  See BugGuide for additional information.

I work at an inn/hotel. We found the bug in one of the rooms after a guest had checked out. My co-worker actually screamed because she did not know what it was. I had never seen anything like it so I started looking around online. And found whatsthatbug.com.

We are still waiting to hear back from Eric Eaton.  It is possible that the last guest in the room transported this Orthopteran from a location in a western state by having it stow away in luggage.

Eric Eaton Responds
October 6, 2012
Daniel:
Forgot to tell you I was going to be out of town last week…..
Yes, it is certainly something in the family Stenopelmatidae.  Definitely had to be from somewhere else.  I understand they sometimes get shipped in nursery stock and what not, burrowing in the root balls and/or potting soil.
Eric

One Response to Jerusalem Cricket in New York?????