Subject: Hermaphroditic Orb Weaver?
Location: Towanda, Bradford County, PA
August 26, 2012 10:26 am
These photos are of orb weaver spiders I saw in Bradford County in NE Pennsylvania in late July and August 2012. They appear to be female, in all respects except that they have large bulbs on the ends of their pedipalps. Needless to say, I was very excited when I found these little creatures, and very curious to find out more about them.
In a small area, there were a few of these hermaphrodites, as well as many ”true” males and females that appeared to be of the same species. I took several photos of the males and females for comparison with the hermaphroditic ones, and would be happy to send those photos to you. The hermaphroditic spiders seem to have slightly smaller abdomens than the females, but their abdomens are larger than those of the males. Their legs seem to be the length of the females’ legs. Also, their behavior seems more female than male – hanging still in their webs with their legs held relatively close to their bodies.
I have since found a few references online of people reporting that they have found hermaphroditic spiders (including a photo of a wolf spider that appears to be male on one side of its body and female on the other). Any help you can give would be greatly appreciated. Thank you.
Signature: Sarah from Philadelphia, PA 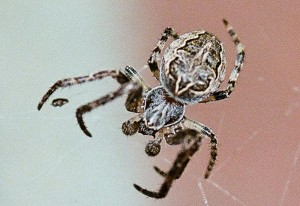 Hi Sarah,
We are very impressed with your thought provoking submission to our site, which is why we are going to devote more than the average amount of time to posting it and we are also going to feature it.  Additionally, we are strapped for time this morning as our staff needs to get to work for the first day of fall semester, so this will be our only posting this morning.  The boundary between the sexes is often blurred in the natural world.  We suspect this might be a genetic trait that can be inherited, which could explain the unusual population of Orbweavers in your vicinity.  First, we cannot say for certain which species of Orbweaver this is, and we also are reluctant to commit to a genus.  Araneus seems possible, as does Neoscona.  We do not feel qualified to provide a scientific response to your submission, however, we are more than comfortable speculating on a few matters. 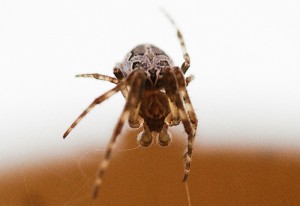 Male, Female or Other, you decide!!!

We would love one additional photo of a female and one of a male to add to this posting in the future.  Please choose representative images for us.  We would also like if you could supply us with the links you discovered during your research.  The bilateral Wolf Spider hermaphrodite you describe is a phenomenon occasionally seen in insects, and the most dramatic example we have on our website is an Eastern Tiger Swallowtail with the female half also exhibiting the less common dark coloration found in a small percentage of female Tiger Swallowtails.  This bilateral hermaphrodite is called a gynandromorp.  We suspect your spiders are more likely true males or females that exhibit some physical characteristics of the other sex, like the Transvestite Rove Beetle in our archive.  Perhaps there is some advantage to mimicking the other sex.  When time allows, we will try to contact a few folks with better credentials that might be able to shed some light on this unusual mystery. 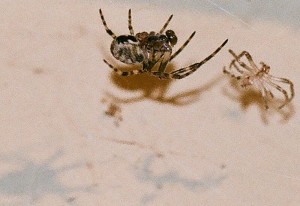 Eric Eaton provides an excellent explanation.
Daniel:
I strongly suspect that the “hermaphrodites” are simply penultimate (one molt away from adulthood) males.  I just learned recently that after the last molt, adult male orb weavers not only lose interest in spinning webs, they actually lose the ability to do so.  They have only one mission as adults:  find females to mate with.  Because they are not capturing prey (at best they are catching far fewer insects), and are roaming long distances looking for mates, adult male web-spinning spiders become quickly emaciated, with shrunken abdomens.  Their legs then look proportionately longer (their legs *are* longer to begin with, but the effect is magnified by the shrinking abdomen).
The images do not show anything unusual in this species, which is the Gray Cross Spider, Larinioides sclopetarius, family Araneidae.
Eric

Update from Sarah
31 August 2012
Thanks so much for posting (and featuring!) my photos and question.  Thanks also for the fascinating and enlightening information Daniel and Eric provided in response.  I was surprised that the male spiders would not have undergone their final molt by the date on which I took the photos (Aug. 23), that their abdomens shrink after that final molt, and that they spin webs like females before adulthood.  Do their legs actually grow longer upon their final molt?
You asked me for photos of the female and adult male that were in the same location as (what I now know are) the penultimate males.  I have attached them to this message.  These photos were taken the first couple days of August, when I first saw this particular group of spiders.
You also asked for the resources I found about hermaphroditic spiders.  Here is a link to a posting and photos of a gynandromorph wolf spider I found on arachnoboards.com:  http://www.arachnoboards.com/ab/showthread.php?208102-Wolf-Spider-Hermaphrodite&s=af18ea376db83e3af777983d26de5395
The same photos were posted on bugguide.net.  That posting includes links to a couple articles on gynandromorphic spiders.  Here’s the link to the bugguide.net page:  http://bugguide.net/node/view/512530
Lastly, your website is wonderful!  It never fails to interest and amaze me. 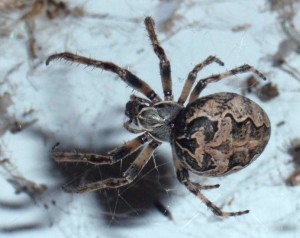 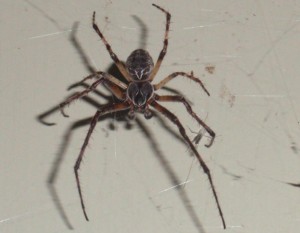 Orbweaver may be Arabesque Spider