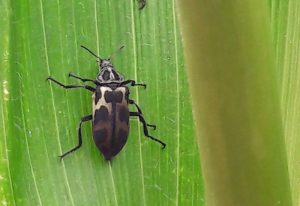 Dear Simon,
We believe we have correctly identified your Beetle as a Spotted Maize Beetle thanks to the Beetles in the Bush site where it states:  “One of the most common insects encountered in agricultural fields in Argentina is Asylus atromaculatus (spotted maize beetle).  This native species can also be found further north in Bolivia and Brazil, and as implied by its common name it is frequently encountered in maize fields.  The species, however, is also common on soybean, on which the individual in the above photo (and mating pair in the previous post) were found.  Looking like some strange cross between a checkered beetle (family Cleridae) and a blister beetle (family Meloidae), it is actually a member of the Melyridae (soft-wing flower beetles)—placed with the Cleridae in the superfamily Clerioidea.”  Elsewhere on Beetles in the Bush, it states:  “For all their ubiquity, however, their economic impact seems more nuisance than substantive. Corn breeders complain about interference during tasseling, and larval feeding on seeds during or just after germination seems to be on the rise due to increased use of conservation tillage, but overall this species seems to be more bark than bite.”  On the A Tale Unfolds site it states:  “Astylus atromaculatus is a species of beetle in the family Melyridae. It is variously known as the Spotted Maize Beetle, or Pollen Beetle. It is indigenous to Argentina and neighbouring countries, but has been accidentally imported into various other regions such as the warmer regions of North America and much of Africa, where it has become invasive.”  We also found a posting on iSpot.