Identification Request: Amusing photo
Location: Phoenix Arizona
August 11, 2011 4:07 pm
This isn’t a question, just something you might find amusing. Our group of beetles at the zoo – the male doesn’t seem to be content with his regular girls. He was very determined to create a new hybrid. The female was just annoyed. If the photo doesn’t go through let me know and I’ll send it via regular email as attachment.
Cheers,
Paula Swanson, Phoenix Zoo
Signature: For your amusement 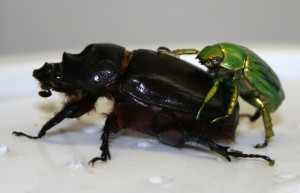 Dear Paula,
We are more than amused.  You don’t have a question, but we can probably think of about a hundred we would like to ask about this Inter-Species Mating documentation from the Phoenix Zoo.  We hope you will be able to answer them.  You mentioned you have a group of beetles at the zoo.  Do you have a full insect zoo?  Is the insect zoo popular?  Do you have an entomologist on staff?  How many different beetles are kept in the same habitat?  What is the habitat like?  Are other insects in the beetle habitat?  Are all the beetles in your beetle habitat strictly local beetles?  How did the beetles come to be acquired by the zoo?  Can you confirm that the male beetle is a Glorious Scarab, Chrysina gloriosa?  Are you attempting an actual Glorious Scarab mating program that will re-release beetles into the wild?  Can you confirm that the female beetle is an Ox Beetle in the genus Strategus?  There are at least two species found in Arizona, the wider ranging Strategus aloeus (see BugGuide), and the more local Strategus cessus (see BugGuide).  Might the “female” be a Rhinoceros Beetle, Xyloryctes jamaicensis (see BugGuide)?  We sometimes have difficulty distinguishing between Strategus and Xyloryctes.  Are you certain the Ox Beetle is a female?  The profile makes us wonder if she might actually be a minor male which have smaller horns.  Here is a BugGuide photo of a female Strategus aloeus, and a BugGuide photo of a minor male.  Thank you for indulging our curiousity.  We want to repeat that we are more than amused by this inter-species mating attempt.  It actually might be successful if both members were in the same genus, but a successful mating between genera, despite them being in the same family, is highly unlikely (most folks would say impossible) to produce viable offspring.  We are also going to contact Eric Eaton to see if he can confirm the identities of the beetles in your photo.

Ed. NOte:  We wrote to Eric Eaton to see if he could determine the identities of this inter-species coupling.

Eric Eaton Responds inconclusively
I honestly can’t answer those questions.  Ok, it probably is a male Chrysina gloriosa….  [Regarding the “female” being either Strategus or Xyloryctes]  Oh, yes, definitely, and *probably* Strategus, given that I don’t think anyone collected any Xyloryctes down here at the conference (I attended with a couple folks from the Phoenix Zoo – shout out to Sarah and Melanie).
Eric

Hello. Paula asked me to reply to your email as I am the primary keeper of our invertebrate collection, and the one who collected them!
Funny thing, Eric Eaton was actually there when I collected these beetles during the IECC conference in Rio Rico, AZ. The beetles in the photo have been confirmed as a male Chrysina gloriosa and a female Strategus aloeus. I was very surprised to find the male gloriosa trying to hard to mate with the female ox beetle! I don’t think he was succesful in his attempts, but it was certainly amusing to watch him try. The beetles are still in “quarantine” and are housed together in a simple mesh cage, without any substrate. They will likely remain together in a multi species exhibit once they leave quarantine. The species in that enclosure currently include Cotinis mutabilis, Chrysina beyeri, Chrysina gloriosa, Megasoma punctulatus (a single male), and the lone female Strategus aloeus.
Currently we are not even trying to breed any of the large scarab beetles – but have been working with some true bugs, lubbers, and smaller beetle species. This is only our second year collecting and exhibiting such a wide variety of native invertebrates. We have a small building dedicated to exhibiting and breeding invertebrates. Currently we have 12 small (10 gallon or less) exhibits in the building, one larger enclosure, and window space for more – in time.  It is a fairly popular exhibit, as far as visitor time spent looking at it anyway. I don’t hear people talking about the exhibit much during their visit elsewhere at the zoo, but they definitely enjoy looking at all the bugs when they are there – especially children, they just love bugs! Currently we are working with native AZ species only (aside from a couple of “exotic” roach species anyway…). We do not have an entomologist on staff, but rely heavily on the friends we’ve made at the IECC conferences for proper ID’s and tips on husbandry. And I have learned A LOT over the past year.
If you have any other questions I would be happy to answer them, it’s always good to make new “buggy” friends 🙂
Sarah Simko
Senior Reptile Keeper
Phoenix Zoo

Wow Sarah,
Thanks for such a concise and thorough response.  Our readers will be very happy with the information you provided.