Subject: Soldier/Futuristic Robot Bug! Crazy moulter??
Location: Evanston, IL lakefront
May 23, 2013 7:13 am
Chicago suburb: Evanston, IL
Lakefront (Lake Michigan)
Dog beach
Small, I would say an inch or less than one inch long
Crazy looking!
Camouflage warrior hard shell on the outside & metallic green robo-bug on the inside (with wings) but did NOT seem to be a bug inside a bug, but rather one single bug that was alive.
Would love to know what this thing is!!
Thanks!
Signature: Izumi 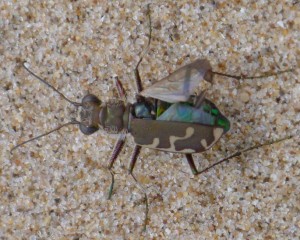 Dear Izumi,
It might take us some time to identify this Tiger Beetle  in the subfamily Cicindelinae that is missing an elytra.

Update:  Ides of March, 2019
We just received a second comment that this is a Common Shore Tiger Beetle, Cicindela repanda.

Tiger Beetle, but what species???