Subject: Caterpillar
Location: Pittsburgh PA
October 14, 2013 2:27 am
Tiny, black and brown. Little more than half inch? I don’t think he has any hair
Signature: Natalie c 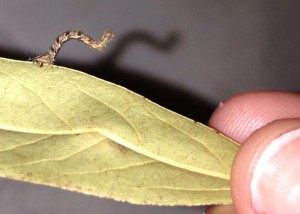 Hi Natalie,
This is an Inchworm or Spanworm, a caterpillar in the family Geometridae.  Caterpillar in this family generally possess but two pairs of prolegs on the rear portion of the abdomen.  Most caterpillars have five pairs of prolegs spread out along the abdomen.  The method of locomotion of Inchworms differs from the typical caterpillar because of the fewer number of prolegs.  BugGuide describes it thus:  “larvae generally have only two pairs of prolegs (at the hind end) rather than the usual five pairs in most lepidoptera; the lack of prolegs in the middle of the body necessitates the peculiar method of locomtion, drawing the hind end up to the thoracic legs to form a loop, and then extending the body forward.”  Inchworms are also called Measuringworms.