Subject: It moved!
Location: Slatington, PA
May 28, 2012 8:53 am
My mother found this thing outside of her house. She thought it was stick, and rightly so. And then it moved! EW! Please tell me what it is, I have never seen anything like this!
Signature: Mandy 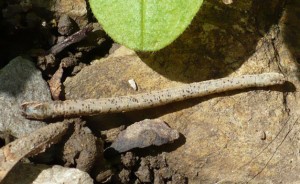 Hi Mandy,
This is an Inchworm or Spanworm, the caterpillar of a moth in the family Geometridae.  They get their common name from the manner of locomotion.  As you can see in the photo where the Inchworm is up-side-down, there are three pairs of true legs near the head and only two pairs of false legs or prolegs near the posterior end of the body.  Most caterpillars have five pairs of prolegs and that enables them to move in an oscillating manner.  There is a drawing on the Enchanted Learning website that illustrates the anatomy of a typical caterpillar.  Inchworms need to crawl forward on their true legs and then loop the rear end of the body forward.  Many Inchworms are excellent twig mimics, and they are known to grasp a stem with the prolegs and stick the rest of the body straight out exactly like a twig.  Our Bug of the Month Posting for April 2011 was the Inchworm and the posting illustrates both the manner of locomotion and the twig mimic behavior.

Spanworms dropping from Trees in Texas

Colorful Inchworm may be Meris alticola