Subject: bug sucking on a monarch caterpillar
Location: SE Wisconsin
August 3, 2015 5:34 pm
Dear Bugman,
We have swamp milkweed in front of my parents’ house and the monarchs love it. For the first time ever, I found this bug sucking the insides out of one of the caterpillars. This was Aug. 3 at about 5 in the evening. I’m familiar with assassin bugs, but not ones like this. I didn’t kill it, but moved it to another part of the yard so it wouldn’t eat the other caterpillars too!
Signature: A.M. 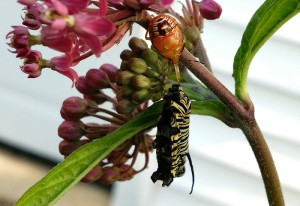