Some sort of assassin bug?
December 10, 2009
The other day my girlfriend ran into the room holding a bug that had been biting her arm. It was a tiny Hemiptera that, legs and all, would be only the size of someones fingernail. We examined it for a while then released it back out into the garden only to find dozens more. Despite the aggressive first encounter they proved to be very pretty, shy little things and proved to be rather difficult to photograph.
These pictures were taken in Taree NSW, Australia in early-mid summer.
My suspicion is that they are an assassin bug, or something similar. I hope you will be able to narrow it down for me.
-Jish
Taree, NSW, Australia 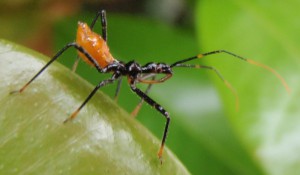 Dear Jish,
Nymphs are sometimes difficult to properly identify, but we believe this is an immature Common Assassin Bug, Pristhesancus plagipennis, which we identified on the Brisbane Insect website.

Assassin Bug from the Philippines

Ground Assassin Bug from Australia
Tagged with → WTB? Down Under