Subject: Australian Redback in Louisiana?
Location: Leesville, Louisiana
May 4, 2017 8:35 pm
I’ve found several of these spiders over the last two years. They have red markings on the back unlike black widows that have a red hour glass on the abdomen. I also noticed some white markings as well. Curious if this could be an Australian Redback???
This one was released back to the woods this evening. May the 4th be with him.
Signature: Thanks, Lee 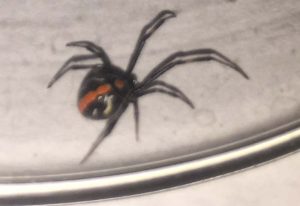 Dear Lee,
This is an immature female Black Widow Spider.  When she matures, she will lose the red and black markings on the upper surface of the abdomen.  She should still have the red hourglass marking on the ventral surface.  Your confusion regarding the Australian Redback Spider is understandable as they are in the same genus as the Black Widow.  P.S.  Is your town named for you?

Announcing a New Tag: The Big 5