Subject: Wasp???
Location: Whangarei, Northland, New Zealand
March 23, 2014 10:11 am
Hi there. Attached is a picture of a wasp-like creature I found in my windowsill. I’ve never seen one before and a friend who lives nearby also found one in her house and has also never seen it before. We live in Whangarei, New Zealand which is in Northland (at the North of the North Island). We wanted to make sure it wasn’t a new immigrant.
Signature: Jana in New Zealand 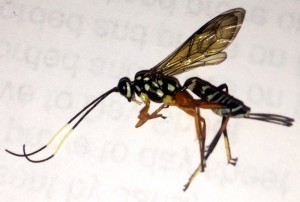 Hi Jana,
This is an Ichneumon, member of a group of Parasitic Wasps that prey upon Arthropods.  Many species of Ichneumons are very host specific, often preying upon a single species of Lepidoptera, Hemiptera or even one of the Arachnids.  Identifying the exact species of Ichneumon in the large and confusing family Ichneumonidae is a daunting task, but if you want to pursue that route, the Landcare Research site for New Zealand might be a good point of departure.

Ichneumon, but what species

2 Responses to Ichneumon from New Zealand