Subject: Huge Bug on Mirror
Location: Vancouver, BC.
July 1, 2014 5:06 pm
Hi Bugman,
I’m trying to figure out what this is- it was in my friend’s house today and its HUGE! It looks like its some sort of Mantis or something- Any ideas?
Signature: Jonathan 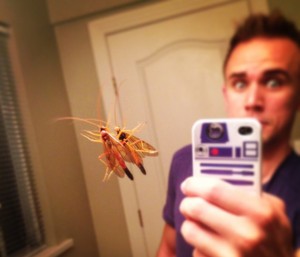 Hi Jonathan,
The look on your face is quite startled.  This is some species of Ichneumon, a family of Parasitoid Wasps that are not aggressive, though we have occasionally gotten reports from folks who have been stung.  Female Ichneumons lay eggs on or near specific insect or arthropod hosts and the larval Ichneumon feeds on the host insect, eventually killing it.  We are unable to determine the species of Ichneumon that entered your friend’s home.  According to BugGuide, the family Ichneumonidae:  “About 5,000 described species in North America, possibly 3,000 more undescribed; arguably, the largest animal family, with the estimated 60,000 species worldwide (up to 100,000, according to some estimates).”