Subject: Big Spider
Location: North Central Florida
May 5, 2017 3:55 pm
I was at work and was unpacking a new air handler that had been sitting in a storage shed for a good 10 years. When I pulled the cardboard off the front, this spider was staring at me right in the face. My boss said it was a brown recluse but I’m not sure. I didn’t think they got that big.
Signature: Eric Villar 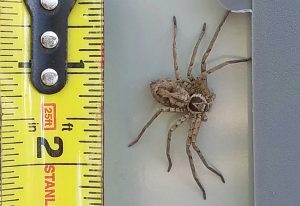 Dear Eric,
This is most definitely NOT a Brown Recluse.  It is a female Huntsman Spider, Heteropoda venatori, an introduced species that has naturalized in Florida and Texas.  They most likely were introduced with banana shipments from Central America many years ago, so they are called Banana Spiders.  This particular species of Huntsman Spider is harmless.  They are nocturnal hunters that do not build webs and they will help keep Cockroaches under control.  Here is a BugGuide image for comparison.  According to BugGuide:  “Can be swift and sometimes aggressive but not considered dangerously venomous to humans. May bite in self-defense if roughly handled; mildly painful bite (can be likened to a bee sting if spider injects venom).“

One Response to Huntsman Spider