Bug or Bird?
Location: Bucks County, PA
July 6, 2011 8:17 pm
My wife took some pics of this bizarre creature. She thought it was a hummingbird, but closer inspection of the pics reveal what looks like insect legs, antennae and a proboscis. She said it was bright orange, had a fast wingbeat and was able to hover about the flowers. It was about 1 1/2 to 2 inches in length and was not afraid of her getting close. We live in suburban Philadelphia and have no idea what this thing is as we have never seen anything like this before.
Signature: Jack 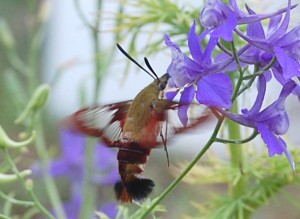 Bird or Bug
Location: Philly
July 6, 2011 8:46 pm
I just sent you a photo of a hummingbird type bug. I have since found it online and identified it as a type of hummingbird moth called a hummingbird Clearwing. I never knew these type of insects existed!
Signature: Jack 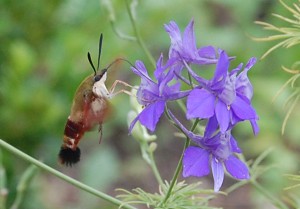 Hi Jack,
The differences between a hummingbird and one of the diurnal Sphinx Moths in the genus Hemaris are much more apparent in a photograph than they are while watching them as the flight patterns are so similar.  Both insect and bird are capable of hovering still while feeding from flowers.

One Response to Hummingbird Clearwing