Subject: WTB – crazy moth???
Location: Mid-Atlantic states
July 25, 2012 2:58 pm
Took these picks mid-July in Virginia, was sitting on my house. Bricks give a pretty good reference for the size. Looks like some supped-up fighter jet to me; the curling of the wings is also bizarre. Never seen anything like it around here, so curious what you think it might be.
Signature: T 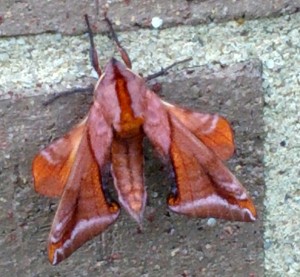 Dear T,
Your moth is a Huckleberry Sphinx, Paonias astylus, and your description that it resembles a souped up fighter jet has been used to describe other aerodynamically shaped members of the Sphinx Moth family Sphingidae that are frequently called Hawkmoths.  You can read more about the Huckleberry Sphinx on the Sphingidae of the Americas website where it states:  “Both sexes rest with wings parallel to the resting surface, with the upper lobes of the hindwings protruding above the forewings. The lower abdomen of the male arcs upward toward the head, while the abdomen of the female hangs strait down on a vertical surface.”  Based on that description, your individual appears to be a male.